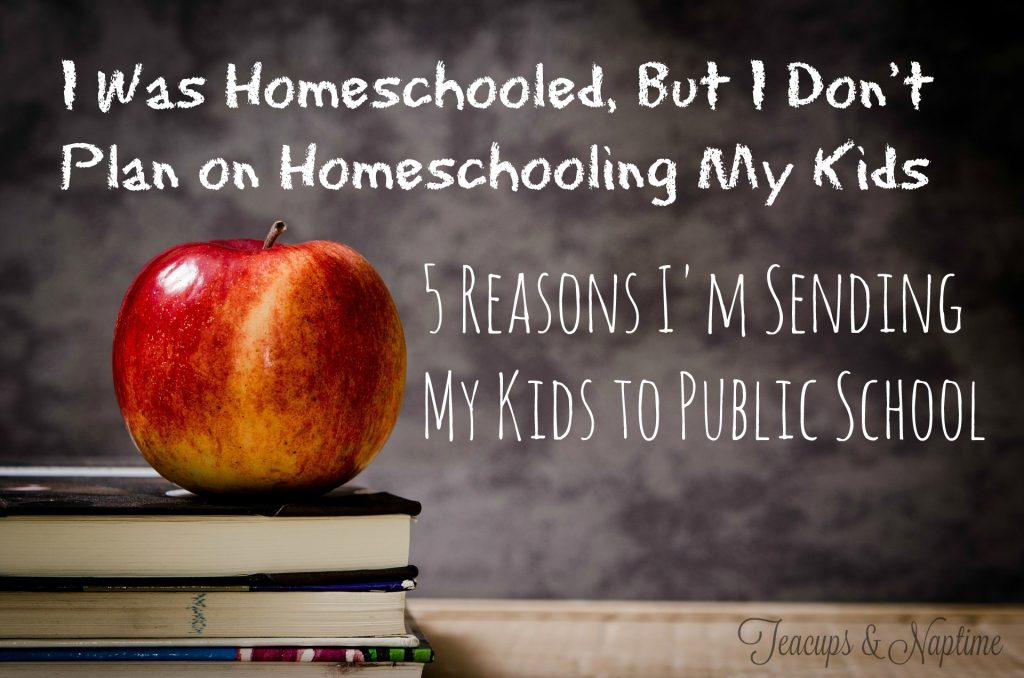 Summer is coming to a close and, even though Baby Bear is only 16 months old, that big pencil display in Target has me thinking about school.

One friend of mine is going to put her 15-month-old daughter in preschool next month. My niece will be starting kindergarten this year (where has the time gone?!). And a close friend of mine has a 4-year-old that she plans on homeschooling. Knowing that I was homeschooled myself, she asked if I was planning on going the same route for Baby Bear. She was surprised (and a little concerned) when I told her “no.”

Don’t get me wrong. In many ways, I enjoyed being homeschooled (so don’t beat yourself up, Mom!). We got plenty of socialization. We went on cool field trips. We got to sleep in (although my mom didn’t allow us to do school in our pajamas). There was no homework (because it was all homework). And we were usually done by 1:00.

Since that conversation, I’ve had some time to sit down and list the reasons I don’t plan on homeschooling my kids, but I want to make something perfectly clear: these are my opinions. I’ve come to realize that—if I really wanted to—I could make homeschooling work for me and my family. Which is why, in the article below, I’ll also include a solution for all my homeschooling objections. 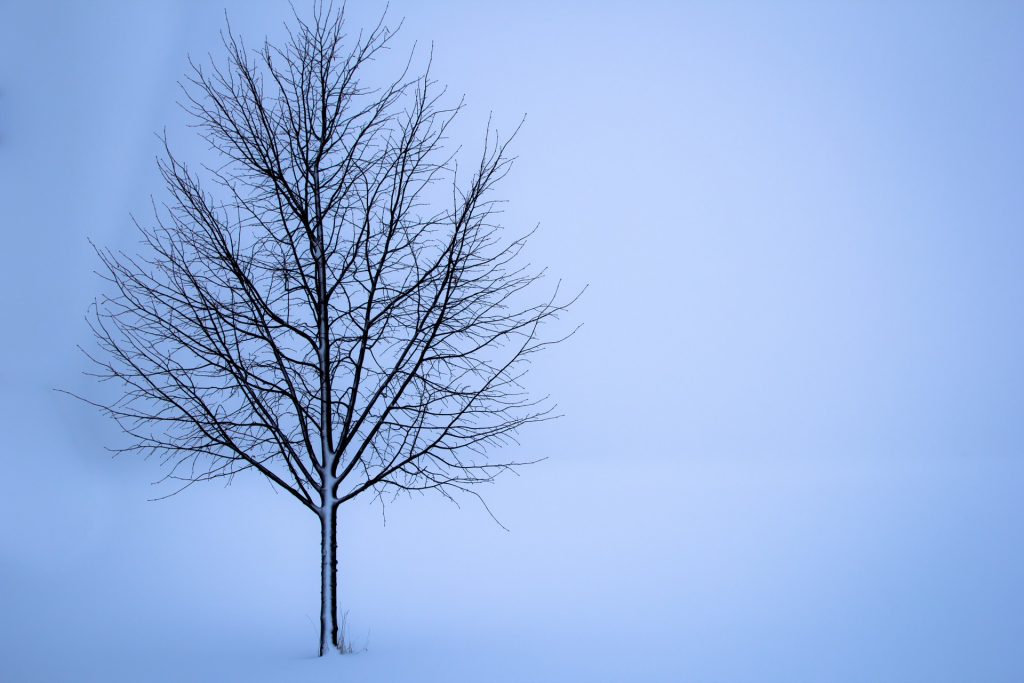 Being a SAHM is hard…especially on introverts. Our babies, toddlers, and preschoolers need us pretty much 24/7, which can lead to serious burnout.

My mom is an extrovert, so I’m sure all that time spent around other moms and kids was good for her mental health. (I’m not exaggerating when I say we got plenty of socialization!) But I need time alone to recharge my batteries so that I’m ready for the next hour. Spending all day, night, and summer with my kids for the next 16 years or so sounds exhausting! So, yes, the school system can have them for a few hours a day.

If I really wanted to homeschool, I would spend a lot of time early on encouraging my kids to be self-starters so that I could get stuff done without having to be the helicopter homeschooler. I would also find some classes for them that I don’t have to be present at or involved in, so they can get some extra learning in while I’m off doing my thing (or at least reading a book on the sidelines).

Before I got married, I worked at a library. People would always ask me whether I thought the library was still relevant. “YES!!!” I would scream, with fire in my eyes, and the reason is this: Google can only take you so far, because people don’t know what they don’t know.

This sounds like a riddle, but it just means that there are gaps in everyone’s knowledge. There are things that you don’t know exist so it never occurs to you to find out more about them. Since I didn’t attend public school, I never studied calculus or trigonometry (I am impossibly bad at math). I never learned about world history in-depth. I was an English major, and I never read Pride and Prejudice until I was about 26 years old.

I want my children to have a well-rounded education, and I’m afraid that if their schooling were up to me, I might leave out something important, either because I find it hard, boring, or because I simply forgot to teach it.

If I really wanted to homeschool, I would get a hold of some sample curriculum from a great school district and use that as my model. I would also hit up Pinterest and YouTube (resources that weren’t around when I was being homeschooled) for those subjects that I know nothing about.

I have a pretty conservative Christian background that has carried into my current worldview. As a child, I learned (and still believe) that abortion is wrong, that the earth was created, and that Christianity is the one true faith. Whether you agree with me or not on these particular issues is beside the point: You have your own biases when it comes to what you want your children to believe. 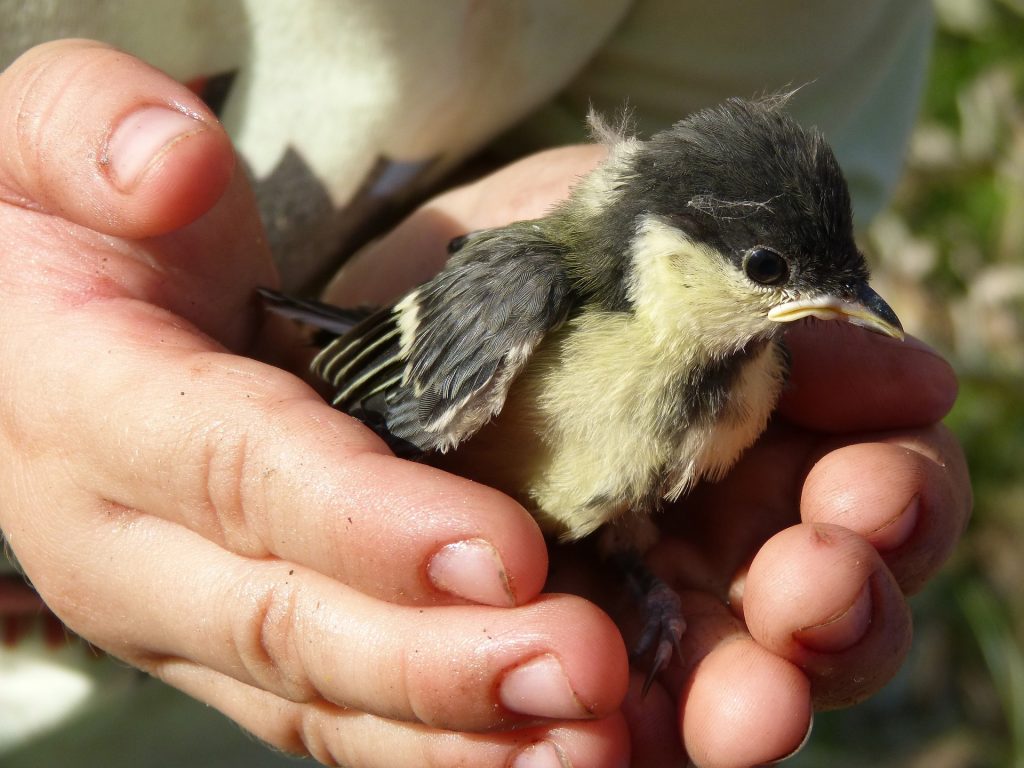 But what happens when your kids leave the shelter you built for them? They are inundated with different views. And most of what they hear isn’t what they thought they would hear. I don’t want to “educate” my kids by setting up straw men for me to knock down with my snappy arguments. I want my kids to know about other religions, cultures, and ideas (yes, even evolution!), so they can be prepared for the backlash they will inevitably experience when they enter the world on their own. As much as we hate to think about pushing our babies out of the nest, that is the point of parenting, isn’t it?

If I really wanted to homeschool, I would make sure to include lessons on every subject. I would teach them from both creationist and evolutionist textbooks. We would learn about other religions (and maybe even visit some temples, mosques, or shrines as a field trip). We will have frequent, difficult conversations about current events and issues.

4. I want to prepare them for college.

I went to the University of Florida because my mom did and I had always wanted to go. I majored in English because I liked to read and write. I took my prerequisites and wrote my essays, and the only time I ever went to a professor’s office hours was when I flunked my first physics test and needed extra tutoring. I was an ‘A’ student while doing ‘C’ effort.

I probably could have gotten internships, a job, or even just some better insight on my future career if I had talked to an academic advisor in college, but it never even occurred to me to do that. The only person I discussed academics with in college was my mom.

Now, my mom is a smart woman, but she didn’t have the resources or connections to help me get the most out of my college experience. She did advise me to dual-enroll at my local community college during my last two years of high school, so I was somewhat prepared to show up to class and follow deadlines, but going to a four-year university was an entirely different beast.

If I really wanted to homeschool, I would encourage my kids to talk to their academic advisors, professors, and deans when they got to college. I would encourage them to do internships, study abroad, and take risks while they have (relatively) no responsibilities. I would possibly even have them dual-enroll, too.

5. I want to prepare them for the real world. 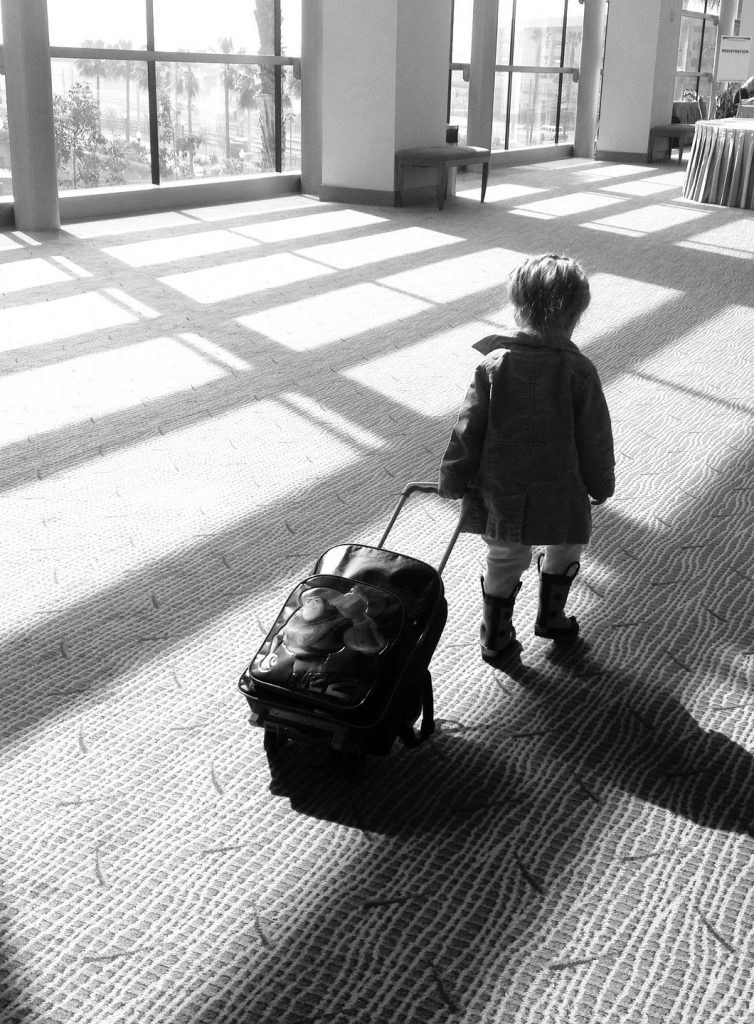 When it’s just you and your kids, it’s tempting to take the easy way out. Let them have the cookie when you’re just too tired to fight about it. Skip math when mom’s not feeling well. After all, they only have to answer to you, so you can afford to cut them some slack, right?

The problem is, the real world doesn’t cut you any slack. Deadlines are a real thing. Mom can’t always help you when you’re in a jam. And sometimes you have to do stuff you don’t want to.

If I really wanted to homeschool, I would make sure that my kids have regular interaction with an authority figure they are not related to. When conflict inevitably comes up (“Ms. Harmon is being so unfair!”), I would give advice but ultimately stay out of it. I will not undermine the teacher/coach’s authority by swooping in and trying to fix the situation. They need to learn that Mom can’t always fix things.

You may have realized this already, but the real reason I don’t plan on homeschooling is that I just don’t want to. Other parents are called to that, and that’s where their priorities lie. Providing the ideal, well-rounded homeschool education of my dreams would take a lot of time and energy, and parenting is hard enough work as it is.

I’m not trying to discourage anyone who wants to homeschool their kids. Homeschooling can be a great way to expose your child to out-of-the-box ideas in a way that regular public school doesn’t. (And who knows? I may change my mind one day.) But if you’re going to take your kids’ education into your own hands, make sure you focus on more than academics. Make sure your kid is ready for the rest of his or her life.